The CR&E is a double-deck around-the-walls N Scale layout with center peninsulas. It was designed for operations and features both mainline and branch line railroading in the mountains of West Virginia and Virginia.

The layout occupies two rooms of a basement, with a connection between the two rooms passing through a laundry room.  "Room 1" is an 11 X 22 foot room that includes the main classification yard at Lewisburg, WV, as well as the mountain-climbing loops that join the two levels.  The mainline towns of Lewisburg, Caldwell, Glace, and Paint Bank are located in this room.  "Room 2" features the towns of New Castle, Abbott, and Catawba on the layout's upper level and the Kessler & Northern coal branches on its lower level.  The two main staging yards (Charleston and Roanoke)  are also located in Room 2.  That room is 15.5 X 19 feet.

Benchwork is open-grid using 1X4, 1X3, and some 1X2 lumber.  Subroadbed is 3/4" plywood for stability.  Cork roadbed and Atlas Code 55 track (with some Micro-Engineering Code 55 mixed in)  are used throughout the layout.

The maximum grade is approximately 2.8% in the steepest part of the loops. Minimum mainline curve radius is 15", although larger curves were used whenever possible.   Most, but not all, of the locations where switching would occur are built level to prevent runaway equipment.  There are intentional variations in the grade profile to help keep crews "on their toes" when operating trains.

The railroad was designed the old-fashioned way with pencil and grid paper, but changes were made along the way as I began seeing how things would look. Therefore, there is no accurate track plan of the layout that could be published.  Part of the design process was to decide the footprint of the railroad, allowing for ample aisle space, and then building what looked good and made sense.  I did much of this using square cells in Excel spreadsheet files.  Generally, I designed everything around 10 foot train lengths (about 25 cars with engines) and spaced passing sidings about 2.5 train lengths apart or longer.

Scenery is a combination of cardboard web with plaster cloth and drywall compound, as well as some foam.

The railroad is controlled using the Digitrax  radio DCC system.  Digitrax signaling components are also used to drive the Centralized Traffic Control system that is used on the mainline.  The dispatcher has control of the mainline territory end-to-end from each staging yard using the CATS dispatching system developed by Rodney Black.  This program overlays JMRI to provide a modern-looking (late 1980's+) dispatching screen.

Construction of the railroad began in November 2008 after insulating Room#1 and adding sheetrock.  Phase One (Lewisburg to New Castle and a temporary Roanoke staging yard) was complete for a trial operating session in December 2009 and a major operating event in February 2010.  Phase Two (New Castle to Roanoke) was completed about a year later, and the K&N District branches followed shortly thereafter.

Below are a few photos showing the construction progress in Room #1, most from the early days of construction. 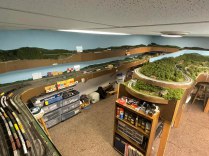 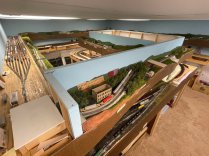 Print | Sitemap
© Marcus Neubacher. This is a personal website with no affiliation with Norfolk Southern Corporation, CSX Transportation, or any other railroad, company, or organization.
Login